So for those who don’t know, what is a Ecotone?

The word comes from the combination of eco(logy) plus –tone, from the Greek tonos which means tension. Thus we have a place where ecologies are in tension, often as not a place where animals are and where I like to hang out.

An ecotone is a biological transition zone between two adjacent plant communities. Here where I live in Southeastern Idaho, an example would be where the sagebrush steppe meets the Juniper forest. The zone between them can be narrow and distinct (think wetlands) or quite wide as where mountain ranges push up.

Natural Ecotones, as opposed to those fragmented habitats created by subdivisions, are very important to animals on the move, as they can exploit two separate habitats in a short distance. Often this gives rise to an “edge effect” along the boundary line and we see a much greater diversity of animals in these zones, as it is much more efficient for animals to acquire what they need to survive here in these ecological niches.

For some background, I was born in the spring of 1954 in Pocatello, ID. I still live here but also spend a great deal of time engaged in self-propelled outdoors activities: running wild rivers, hiking, backpacking, backcountry skiing and spending time at our cabin near Tetonia, Idaho. I’m a retired accountant, and help my wife a bit who manufactures and sells fly-fishing lanyards and accessories on her web site at:

I trace my passion for hanging out in wild, remote places to a stormy Easter weekend in 1969 when I got to go with my folks to some good friend’s cabin along Panther Creek in east central Idaho. They had a couple of “mini-bikes”, and I immediately hopped on one and blasted off. Just like a pup released from a leash, I was free as a bird. Soon I was headed up a side canyon and ended up at a hot springs. Maybe it was the strong sulfur smell that I was inhaling, while sitting naked on a wooden plank, inches above boiling hot water, or the sight of the snow falling from the frequent spring squalls that were passing through, but that memory is still very vivid to this day and the die was cast, I was happiest exploring wilderness areas – the more remote the better!

I’m a self taught photographer, learning mainly through trial and error, with a healthy dose of the latter. I have been taking photographs since the early ‘70’s when my mom and dad helped me get an Olympus OM-2N and a couple of lens. I have been using Canon equipment for the last 15 years, but in the autumn of 2008 I switched over to the "dark side" and started using Nikon, which is just a better fit for me, though I have no allegiance to either. I'm slowly migrating to mirrorless cameras, and have a Sony a7III.

My best nature photography has been done solo. If forces me to calm down and be patient. It is only then that I notice the beautiful shapes, speed and direction of the clouds moving overhead, the insects moving along the ground by my feet, the echoing call of a Swainson's Thrush in summer. It reminds me of the connections to our primal past and how interconnected, equal and important all life forms on this blue planet are.

Hopefully I have been able to capture some image that will tug at your heart, make you reflect on how special every critter is out there (including predators), cause you to look away from your computer screen for a second and contemplate just how beautiful, fragile and ephemeral our natural world is and continue the fight to preserve it.

"The world is big and I want to have a good look at it before it gets dark." - John Muir 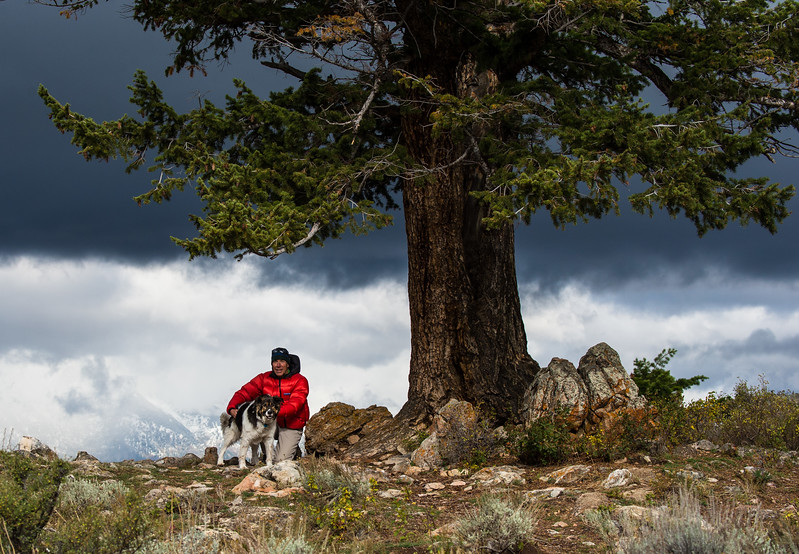 A boy and his dog beneath the "Marriage Tree" , above Gros Ventre River, Wyoming.